Manifesta, the European Nomadic Biennial, changes location every two years. Founded in the early 1990s, Manifesta rethinks the relation between culture and civic society, investigating and instigating positive social change through contemporary culture in response to, and in close dialogue with, the social sphere of the Host City and its communities. Manifesta has consistently chosen unexpected host locations that reflect Europe’s ever-changing DNA to shed light on a world defined by changing ethical and aesthetic imperatives. Manifesta, as a recurring event, has transformed itself into a multilayered and inclusive instrument of civic engagement projects.

Manifesta 14 Prishtina is taking place in Prishtina, Kosovo. Manifesta 14 aims to support the citizens of Kosovo in their ambition to reclaim public space and to rewrite the future of their capital as an open-minded metropolis in the Balkans and in Europe through the development of a new cultural institution. Manifesta, comes with a 100-day programme of art, performances, events and workshops with the goal of empowering citizens to reclaim public space.

One of the key pillars of Manifesta, the European Nomadic Biennial, is its strong focus on urban development within its Host Cities. For each Manifesta edition since Manifesta 12 Palermo, an in-depth urban research project is produced by a leading international architectural bureau. Manifesta 12 invited the prominent Rotterdam based architectural office OMA and the 13th edition in Marseille commissioned MVRDV’s Winy Maas to create the Urban Vision. For Manifesta 14 Prishtina 2022, the Turin-based office CRA-Carlo Ratti Associati has been selected.

The Urban Vision functions as both pre-biennial research and a long-term plan to identify possible strategies, sites, communities and key topics for the city. The Urban Vision informs how Manifesta 14 will take shape within the local context, but most importantly it is commissioned to develop how the city of Prishtina could be transformed by reclaiming public space by its citizens.

Carlo Ratti’s Urban Vision is structured around two main pillars. The first pillar is the innovative, open-source urbanism methodology that has been tested in Prishtina since Spring 2021. The second pillar is the use of artificial intelligence to analyse public space in Prishtina.

If we stay naturally, Bora Baboçi 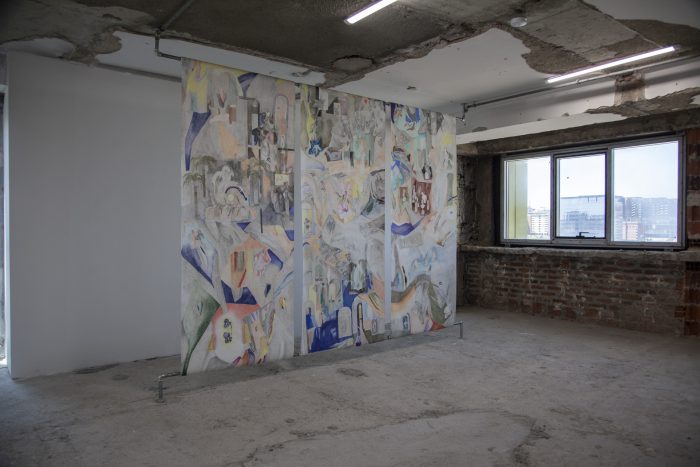 Images flow in and out of memory. They recur, though they invariably shift and wander, forever altering their orientation and alliances. In her work, Bora Baboçi explores the elusive nature of memory through the process of embodied composition.

She draws upon an imaginary of aquatic qualities, its depths becoming surfaces, transparencies fading into opacities amid seemingly infinite images of fragile narration. The work comprises an engulfing, dreamlike drawing – a composition in waiting – and footage of the artist’s collaborative enquiry with choreographer Gentian Doda.

The two offer instructions to the visitors on ways to interact with the composition – and to thus participate in its becoming. In her non-linear, iterative enquiry, the artist reflects on how the perception of belonging, origin stories and their seemingly natural qualities occur within the constraints of body, space and time, while inevitably being at odds with all three.

In this, she keeps company with American writer Gertrude Stein, who muses that “composition is not there, it is going to be there and we are here. This is some time ago for us naturally”.

When the sun goes away we paint the sky 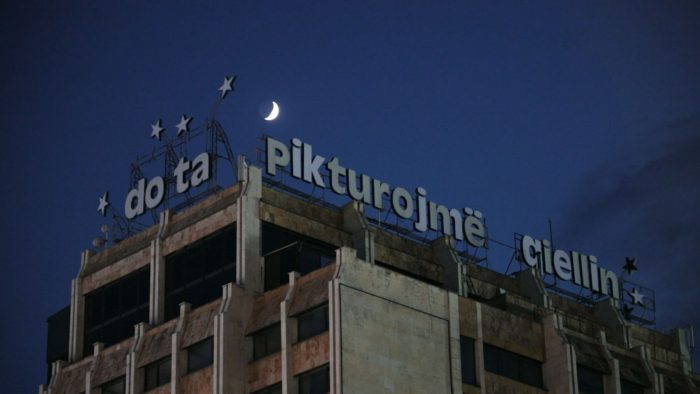 When the sun goes away we paint the sky, 2022, © Petrit Halilaj. Photo © Manifesta 14 Prishtina / Arton Krasniqi

When the Grand Hotel Prishtina opened its doors in 1978, it transformed what was once the end of the city into a vibrant new centre. Though its five stars have been taken down one by one over the years, and the lights on its iconic sign switched off, people in Prishtina still orbit the Grand like the Earth does the sun.

For his contribution to Manifesta 14 Prishtina, Petrit Halilaj has temporarily transformed the darkened sign atop the hotel into a poetic call to his fellow residents: “when the sun goes away, we paint the sky”. Citing twelve-year-old Njomza Vitia, the new sign combines existing letters with additional ones – all of them lit. As the start of a bright blanket of stars spreading out to fill the city, the artist has also remounted and reconfigured the hotel’s original stars.

People from Kosovo have been – and still are – invited to collectively create this new constellation by making and displaying stars of their own. No longer a symbol of luxury, the stars are free to signify other values, to embody new desires, to invoke different longings and becomings. 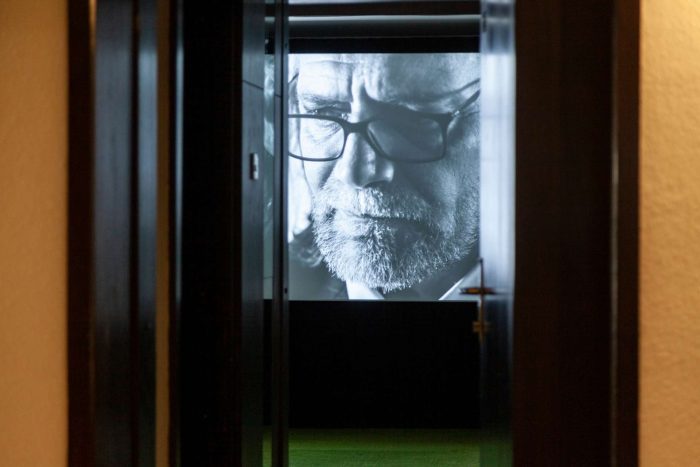 An artist and a critic wind their way around each other in a labyrinthine modernist ruin. Enmeshed in an intricate interrogation of modernism, strangely resonant of contemporary discourse, the two adversaries pit realism against abstraction and the socialist “new man” against “his” bourgeois degenerate counterpart. Their contrary lines of thought stem from the mind of one and the same person: the Albanian art historian Alfred Uçi.

His excoriating critique of modernist aesthetics, Labyrinths of Modernism, published in 1978, helped enshrine the doctrine of socialist realism in socialist Albania. It assisted the persecution of countless artists perceived to deviate from its dictates. Genti Korini juxtaposes a neo-noir staging of Uçi’s interior dialogue with a secret service file that denounces an artist for his aesthetics.

Korini draws on the modernist trope of the artist as spider, as a weaver of illusions, a creature as admired for its creativity as it is despised for its treachery. Yet who is the spider and who is the prey? And who entraps whom in which deceit?