MDU is an associated architecture studio born in Prato in 2001 and made up of three partners: Alessandro Corradini, Cristiano Cosi and Marcello Marchesini.

MDUhas distinguished itself in the competition for the numerous awards it has received, including nine first prizes. The results of the debate and the research that MDUconstantly carries out while teaching at the university or within the studio, even with friends who pass through, has encouraged participation in exhibitions and initiatives around the theoretical dimension of architecture. Marcello Marchesini is currently an adjunct professor at the Faculty of Architecture of Ferrara where he teaches Architectural Design in the third year since 2013.

MDU is present in the History of Italian Architecture 1985-2015, Marco Biraghi, Silvia Micheli, Ed. Einaudi and was selected for the 14th International Architecture Exhibition at the Venice Biennale. 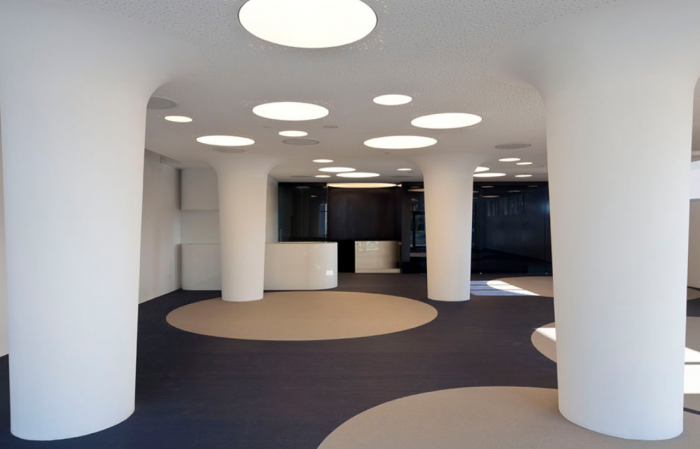 The project aims to design an interior space free from the constraint of the walls that delimit its shape and compromise its spatiality. The project aims to be an open space, a place "without walls, but trees .... infinite trees", a project that dreams, that wants to "bring the sky into a room". Here then is that the pillars become trunks of plants with the foliage that extends upwards, the floor a great blue sea that transports visitors between the shores of the islands, real atolls within which the works of art on display they can find shelter and protection. At the bottom of the sea, on the horizon, a blue glass wall marks the boundary between the sea and the sky. Impassable limit which, once entered through the staircase, allows access to the basement. Here the visitor is projected into a dreamlike dimension that anticipates a journey into the unknown: it almost seems to be underwater where, in apnea, holding your breath, you find yourself immersed in a singular world that moves and changes, the perception of what's this. The gallery was conceived as a succession of "territorial rooms" where inside and outside mix and blend poetry and suggestion, dream and lyricism ...

A 34-year-old guy, who decides to reorganize an old apartment in Florence to return to live with his future wife. A double volume, a mezzanine and the opportunity to make a forgotten attic habitable and abandoned for too long now. The need not to close the space too much and have continuous visual contact with the different areas of the house, the different rooms that are obviously inhabited and used differently. The house revolves around the new rediscovered volume of the attic, the true protagonist of the entire spatial articulation, both from a functional and perceptive-visual point of view. Its presence is constant and like a bubble it dilates and expands, rising lightly and frothy upwards. Sweet and enveloping, like a midsummer aperitif. A perforated net, some lights, a bit of stringers and some vintage furniture: the cocktail is served! 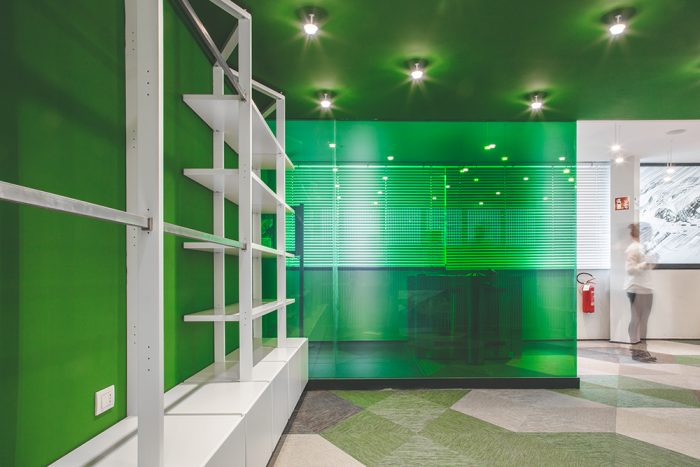 The project for the new entrance of Klab focuses on the possibility of communicating, through architecture, energy and movement, dynamism and the feeling of well-being: all qualities that are sought precisely by those who decide to attend a gym. The materials used and the images chosen completely renew the previous image by playing above all with the green color and its shades, evoking the predominant tones and atmospheres of the exterior as the entire building of the gym is immersed in the nature of the hills of the Tuscan landscape. 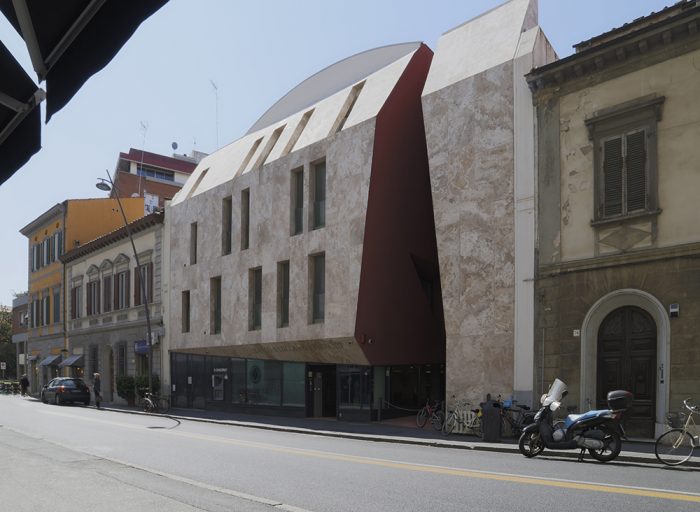 The theme of the project was to redevelop a small portion of the urban fabric of Livorno near the historic center, in the commercial heart of the city. The two buildings purchased by the client overlook via Marradi and via Roma, two parallel streets which, before the intervention, were not in communication with each other. The main idea of ​​the project was to put the two paths in contact, to unite: and how was it possible to do this? With a break, that is, by cutting the urban fabric with a new public pedestrian path ... ironically, we have divided to unite! The new internal path on which residences, shops and offices overlook, allows you to regain, from inside the lot, a possible perception towards the outside, allowing you to recover the view of the sky. A clean cut to let in air, light, wind and rain: because from this cut it rains! Literally, a real Montale-style gash, a Matta Clark cut, capable of making public and private spaces dialogue without forcing and unnecessary conflicts, which have always been considered spaces with unbridgeable differences rather than places with possible relationships. 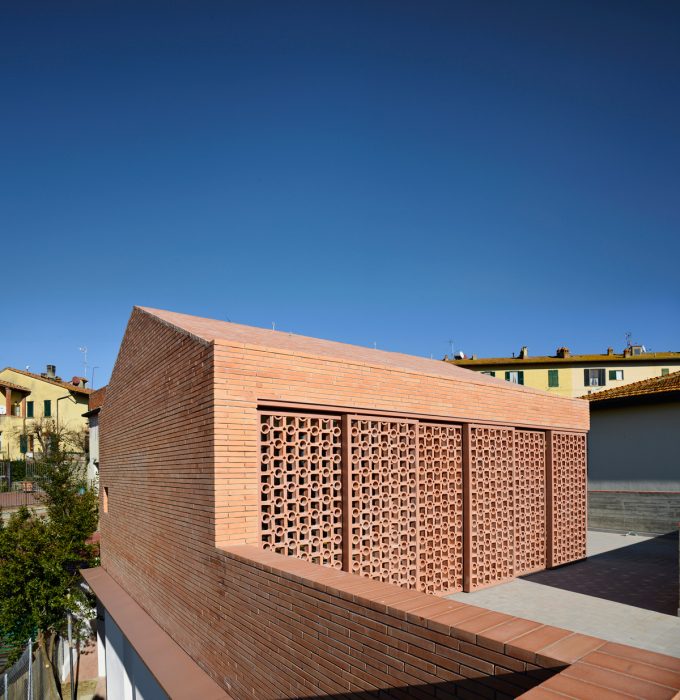 The most interesting aspect of the existing house, more than in the architectural characteristics itself, lies in its geographical location, which guarantees a series of very suggestive panoramic views towards the open territory. The renovation project starts from the theme of visual relationships with the landscape context, as a matrix and generator element of the architectural project, developing the theme of raising. The project which consists of dividing the property into two real estate units and increasing the surface area of ​​one of them through the benefits of the "House Plan", involves the functional reorganization of the spaces on the ground floor and the creation of a new volume on the floor. first to welcome the living area of ​​one of the two apartments. 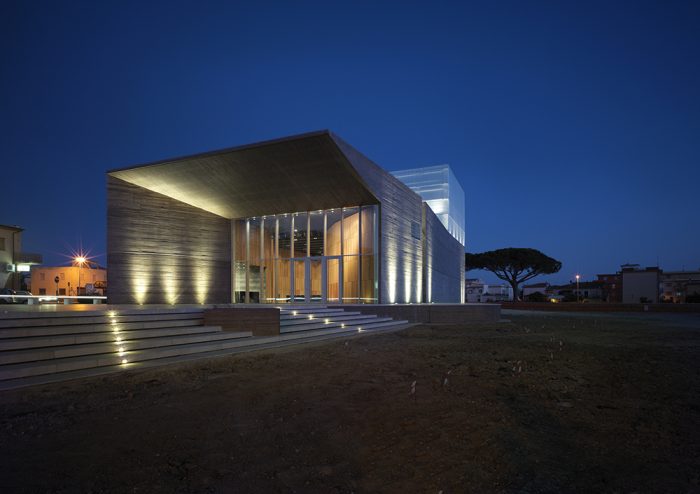 The project for the new theater is a large exposed reinforced concrete monolith characterized by slight chromatic variations on which the scenic tower rests, ethereal: a polycarbonate volume that dematerializes during the day and lights up at night to become a large lantern light that communicates not only with the nearby urban fabric, but also with the entire distant surrounding area. 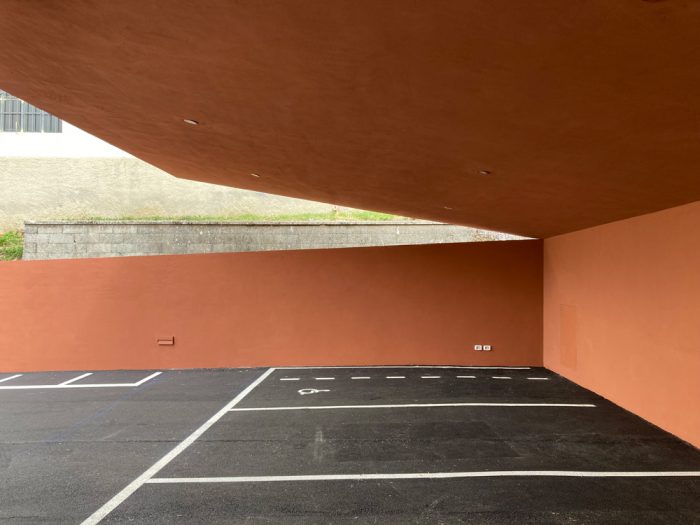 The space is configured as a recognizable and circumscribed environment, in which the relationship between the void and the surrounding buildings is mediated by the presence of a low curtain wall and a cantilevered canopy, placed at the bottom of the area, which characterizes the perspective view and the propensity to also host related cultural and recreational initiatives. This aspect effectively gives the area a collective value at the service of the country.

"The milk of dreams" Venice Biennale 2022