Originally from Bridgend, south Wales, Levete was a student at St Paul's Girls' School, London and the Hammersmith School of Art, enrolled at the Architectural Association became a trainee at Alsop & Lyall and an architect at the Richard Rogers Partnership. As co-founder of the firm Powis & Levete, she was nominated for the RIBA's '40 under 40' exhibition in 1985. Levete joined Jan Kaplický at Future Systems as a partner in 1989, served as a trustee of the arts organisation Artangel from 2000 to 2013, and is a trustee of the Young Foundation.

Levete is credited with making Future Systems' organic and conceptual designs a reality. Recognised as one of the UK's most innovative practices, Future Systems completed works include the Selfridges department store in Birmingham and the Lord's Media Centre, which won the Royal Institute of British Architects' Stirling Prize in 1999.

Levete formed AL A (formerly known as Amanda Levete Architecture) in 2009, and in 2011 the practice won the international competition to design a new entrance, courtyard and gallery for London's Victoria and Albert Museum, which features a porcelain courtyard. AL_A's projects include the MAAT (Museum of Art, Architecture and Technology) project in Lisbon for the EDP Foundation, the Central Embassy project in Bangkok, 10 Hill's Place in London and the pop-up restaurant Tincan.

In 2014 AL_A was chosen to design the second MPavilion for the Naomi Milgrom Foundation in Melbourne, the first to be designed by an international architect. The M-Pavilion, made from fibreglass overlapping petals, opened to the public in October 2015.

The Museum of Art, Architecture and Technology (MAAT) in Lisbon opened on 5 October 2016 with site-specific work from Dominique Gonzalez-Foerster. The €20m museum sits on the River Tagus (Rio Tejo) to the west of the city centre and was described as "sinuous" and "one of Europe's most lyrical new museums". Also in 2016, AL_A completed the 13-hectare media campus headquarters building for Sky Central project in London central in London.

In the 2017 Queen's Birthday Honours Amanda Levete was appointed Commander of the Order of the British Empire (CBE), for services to architecture.

In 2018, Levete was awarded the Jane Drew Prize by the Architects' Journal and Architectural Review.

In 2019 she was elected an Honorary Fellow of the American Institute of Architects.

In 2021 she was elected to be a Royal Academician.

Drift came about after thinking of the bench as a line that has gently drifted backwards. We have used the same kind of language developed for Chester where the surface is modulated and carved to accentuate form. It is a seamless piece where the turbulence of the surface creates patterns of light and shadow on the oblique planes giving a dynamic force to the form. 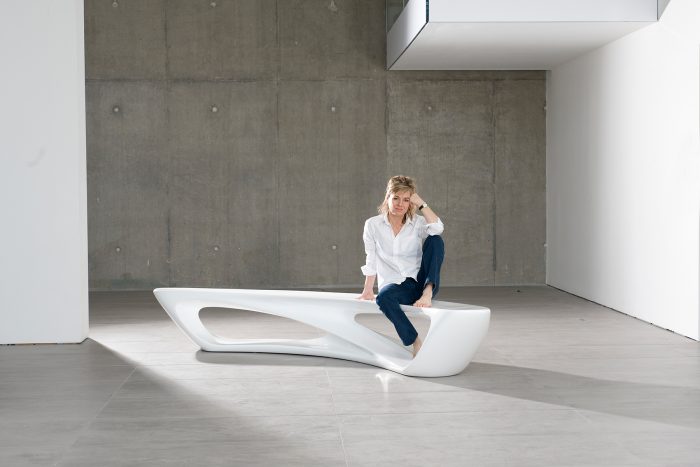 The brief to create a new kind of space with an atmosphere of experimentation has resulted in three powerful, uncompromising environments, focussing on the threshold between arrival and entry.

Two horizontal concrete slabs of a dumb existing building are joined with two ribbons of conical-curved, inclined glass offering a simple liquid entrance where they converge. The glass is covered with a layer of translucent blue dots which act as a filter between inside and outside. At night the movement of people within the shop creates a curiosity for the pedestrian passing the façade. 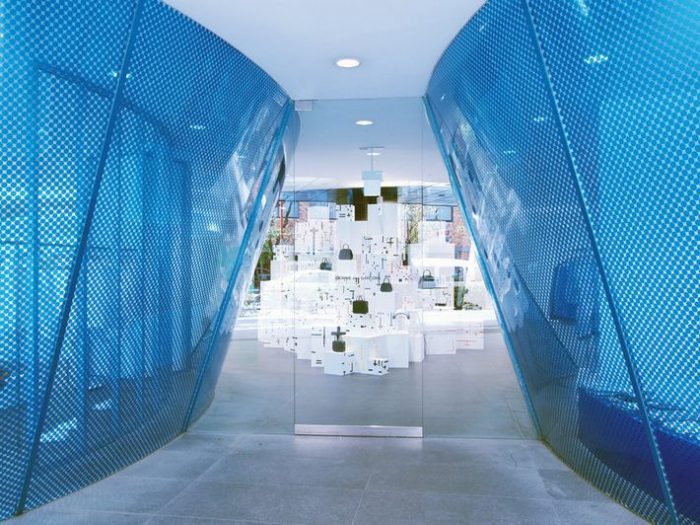 This is the first building to be completed as part of AL_A’s masterplan for BskyB’s media campus.

The Hub creates a spectacular working environment for 400 people in 6,000 m2 with exceptional daylight from north facing roof lights.

Inspired by Sky’s values of transparency and collaboration, the open and flexible spaces are designed in clusters of neighbourhoods to accommodate a new type of creative industry. Traditional distinctions between creative, technical, production and corporate have are broken down by the architectural design.

The architectural design allows and encourages the Sky vision by providing spaces that reflect the dynamism and opportunities that Sky wish to produce. the new environment promotes flexibility, openness, ease of access and communication supporting the core values that underpin the vision. 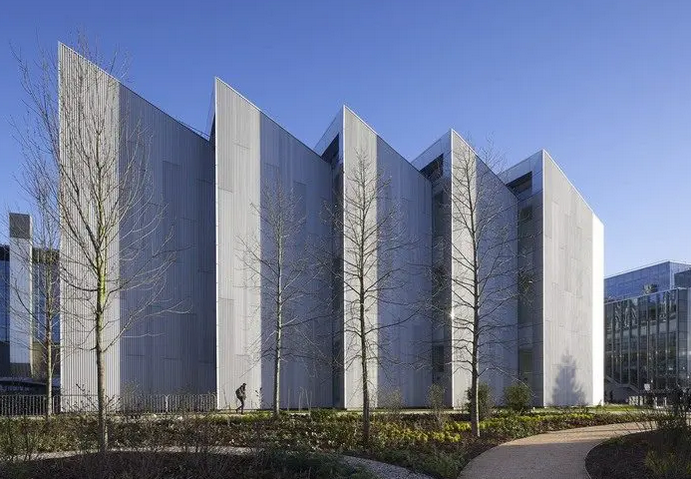 aL_A has won an invited competition to design a new mosque in Abu Dhabi. The Mosque is part of the World Trade Centre developed by Aldar Properties, one of the largest developers in the Middle East and North Africa region.

The practice’s proposals see the new 2,000m² mosque and park as an escape from the immediate context of the vertiginous steel and glass of the World Trade Centre and provide a focal point of worship for its inhabitants.

“The Mosque is envisaged as a piece of the city, one that reflects the journey from the temporal to the spiritual. Set within a park, the mosque and the garden become one, with the trees and the columns forming an informal vertical landscape and allowing Friday prayers to spill outside.

“Inside, shafts of light penetrate the roof of the prayer hall. This daylight, dappled or dramatic, animates the space and activates the senses.”

The World Trade Centre Abu Dhabi, design by Foster + Partners, is a 700,000m² fully integrated mixed-use facility comprised of offices, residences, a mall, a souk and a hotel. 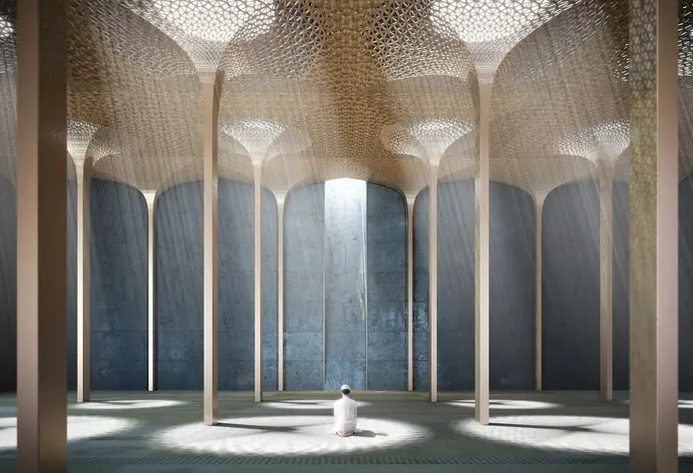 AL_A was shortlisted for a competition to remodel the public spaces of Le Louvre and to reinterpret the spaces for mediation and information. The objective was to make the visitor experience pleasurable and uplifting by liberating I.M.Pei’s Pyramid, restoring the brilliance of his vision by removing its function as an entrance and exit to the Museum, and reinstating the structure as a destination in its own right.

Our radical proposition was to enter Le Louvre directly from the courtyard through the three original entrances to the historic Palace. This move gives the visitor an intuitive understanding of the complexity of the museum. The immersive experience of entering directly into one of the palace rooms allows the visitor to immediately establish a visceral relationship with the collection.

In each ancient hall, a finely crafted piece of modern design was inserted, displaying a vast array of visitor information. This continues Le Louvre’s brave juxtaposition of the historic and contemporary for which they are so well known.

Our ambitious brief was not only to design a state of the art department store but also to create an architectural landmark for Birmingham so that the building itself would become a genuine catalyst for urban regeneration.

We have re-interpreted the notion of a department store, not just in its form and appearance but also in the social function such a building now plays in our society. Its relationship to the church is significant, representing the religious and commercial life of the city that have evolved side by side over hundreds of years. The building provides an ethereal backdrop to the Gothic architecture of St Martin’s and its closeness creates a powerful visual tension between church and department store. Glimpsed from the train entering Birmingham from the south, it promises mystery and excitement in a city undergoing a twenty-first century renaissance.

The fluidity of shape recalls the fall of fabric or the soft lines of a body, rises from the ground and gently billows outwards before being drawn in at a kind of waistline. It then curves out again and over to form the roof, in one continuous movement. The skin is made up of thousands of aluminium discs, creating a fine, lustrous grain like the scales of a snake or the sequins of a Paco Rabanne dress. In sunlight it shimmers, reflecting minute changes in weather conditions and taking on the colours, light and shapes of people and things passing by – an animate and breathing form. 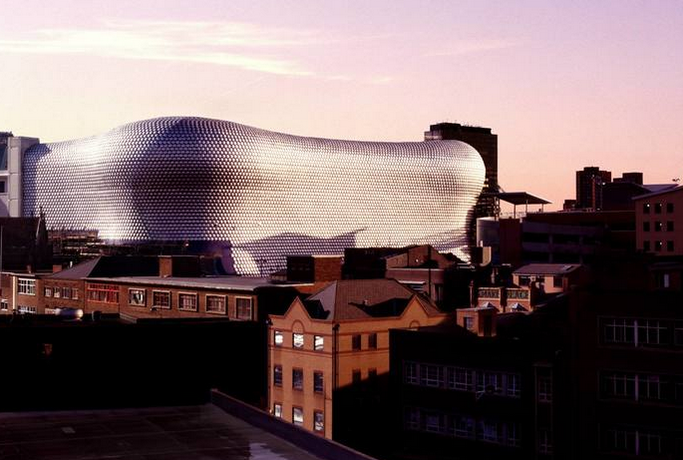 44 luxury apartments sited on a peninsula in the Port of Copenhagen. In order to create a slender profile to this 11 storey high building, the plan of the apartments is conceived as 3 towers linked in a petal formation. The structure is a single pre-cast concrete frame with blue pigmented render as a facing material.

Future Systems worked closely with the developer client and the contractor as a design consultant during outline and detailed design stages. All the apartments were sold prior to construction commencing. 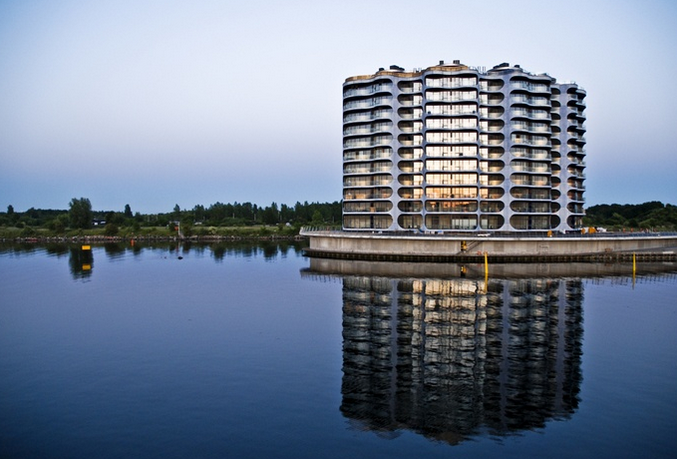 Using the power of absence to create connections between history and the future, a sunken courtyard is embedded between the existing Museum building and the new North Wing. The courtyard is a metaphor for the cycle of the seasons, capturing the dramatic contrasts of the climate. It creates a place for contemplation and reflection and a place for community.

Encircling the courtyard is Mumbai Modern, a gallery that forms the beating heart of the Museum, mediating between the old and the new.

The new wing is a silent art container clad in a veil of red stone that speaks of the history of Indian craftsmanship. 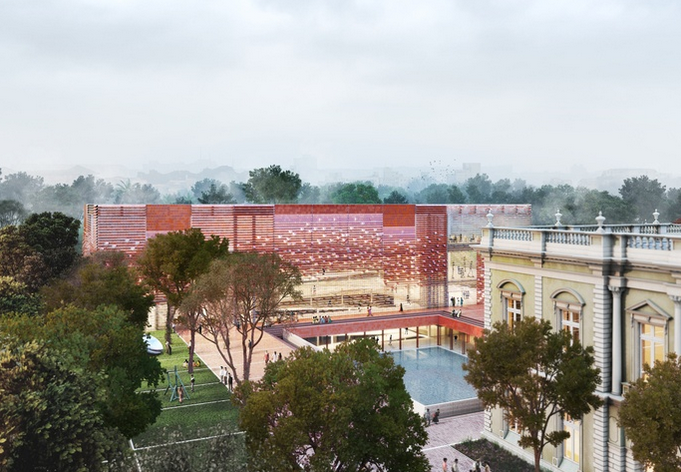 MAAT, the new Museum of Art, Architecture and Technology, is an outward-looking museum located on the banks of the Tagus in Belém, the district from where the Portuguese great explorers set off.

Proposing a new relationship with the river and the wider world, the kunsthalle is a powerful yet sensitive and low-slung building that explores the convergence of contemporary art, architecture and technology.

The new building is the centrepiece of EDP Foundation’s masterplan for an art campus that includes the repurposed Central Tejo power station.

Incorporating over 9,000m² of new public space and blending structure into landscape, the kunsthalle is designed to allow visitors to walk over, under and through the building that sits beneath a gently expressed arch.

During the first year of opening, MAAT welcomed over 500,000 visitors, making it more popular than any public Portuguese museum. 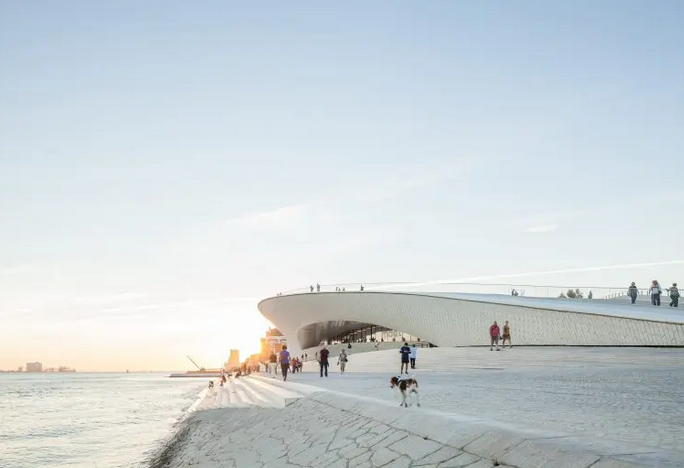