Ricardo Bofill Leví (5 December 1939 – 14 January 2022) was a Spanish architect from Catalonia. He founded Ricardo Bofill Taller de Arquitectura in 1963 and developed it into a leading international architectural and urban design practice. According to architectural historian Andrew Ayers, his creations rank "among the most impressive buildings of the 20th century." 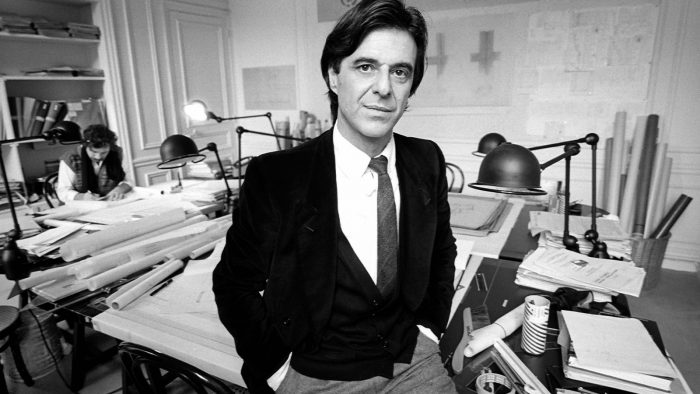 Born in late 1939, just after the end of the Spanish Civil War, Ricardo Bofill grew up in a well-to-do family with deep Catalan and Barcelonese roots. His grandfather Josep Maria Bofill i Pichot (1860-1938) had been involved in prominent local institutions such as the Institute for Catalan Studies, the Catalan Institute of Natural History. and the Royal Academy of Sciences and Arts of Barcelona. His father Emilio Bofill (1907-2000) was an architect, builder, and developer who studied at Escola Tècnica Superior d'Arquitectura de Barcelona, Catalonia's oldest professional architecture school. Ricardo Bofill would later describe him as "republican, liberal, progressive, austere and logical." Ricardo's mother, Maria Levi (1909-1991), was an Italian of Jewish descent born in Venice, who became a prominent sponsor of Catalan literature and culture in postwar Barcelona.

Bofill studied at the Catholic Escuela Andersen in Barcelona from 1949, then at the Lycée français de Barcelone. He spent much of his youth traveling, first with his family and later on his own, and developed a passion for vernacular architecture. In 1957 he enrolled at the Escola Tècnica Superior d'Arquitectura de Barcelona, where he engaged in student activism with the unauthorized Unified Socialist Party of Catalonia, and was soon arrested in a demonstration and expelled from the university and from Spain. He moved to Switzerland and enrolled at the Haute École d'art et de design Genève in 1958, which he left in 1960 to return to Spain. His first architecture design was a summer home in Ibiza, completed in 1960. In 1961-1962 he went into Spanish military service for nine months.  He was again arrested and briefly incarcerated on political grounds in Barcelona in 1964.

In 1963, Ricardo Bofill and a group of close friends created Ricardo Bofill Taller de Arquitectura (Ricardo Bofill Architecture Workshop), initially hosted in his father's construction business with offices on Plaça de Catalunya in the center of Barcelona. Building on Catalan traditions of craftsmanship, he enlisted architects and engineers but also writers and artists into a multidisciplinary effort, which later branched into urban design and urban planning. The team experimented on original methodologies based on three-dimensional modular geometries, such as those of the Gaudi District in Reus (1964-1970), El Castillo de Kafka in Sant Pere de Ribes above Sitges (1964-1968), Xanadu (1966-1971), and La Muralla Roja (1968-1973) in Calp. The same thinking was developed on a larger scale with the project La Ciudad en el Espacio ("The City in Space"), whose construction started in the Moratalaz area of Madrid in 1970 but was abruptly stopped by Francoist mayor Carlos Arias Navarro. It was instead realized with the construction of Walden 7 in Sant Just Desvern near Barcelona (1970-1975). These projects were recognized as exemplars of critical regionalism and can be viewed as a reaction against both architectural modernism and the Francoist dictatorship in Spain.

Bofill then started working in France, and gradually introduced symbolic elements into the Taller's designs that echo French traditions of classical architecture. In 1971, he was invited by Bernard Hirsch, a key planner of the Cergy-Pontoise urban project, to develop a design concept analogous to that of the Barrio Gaudí in Reus. This morphed into a project named La Petite Cathédrale ("the small cathedral") but actually intended as a large-scale development, which was approved in 1973 but canceled in 1974. Another major development was a competition-winning concept for Les Halles in Paris in 1975, whose construction subsequently started but was reversed in 1978 by the newly elected mayor Jacques Chirac. Other projects did come to fruition in the villes nouvelles  around Paris which offered a favorable environment for large-scale experimentation, including Les Espaces d'Abraxas in Marne-la-Vallée and Les Arcades du Lac in Saint-Quentin-en-Yvelines. This phase culminated in the expansive Antigone new district of Montpellier in Southern France, for which Bofill presented the initial master plan in 1978. It is associated with both large-scale industrialization in precast concrete and classical forms and geometries in contemporary architecture, which Bofill called "modern classicism". As a consequence, Bofill opus is often cited as that one of the most representative and signififant postmodern architects to have lived and created in Europe.

From the mid-1980s on, he increasingly shifted to glass and steel for the materials used in his projects, while still using a classical vocabulary of columns and pediments. Representative projects of that period include the 77 West Wacker Drive office tower in Chicago, the extension of Barcelona Airport ahead of the 1992 Summer Olympics, and the National Theater of Catalonia, also in Barcelona.

In 2000, Bofill re-centralized the activities of the Taller at its head office near Barcelona. His designs in more recent years gradually shed his classical decorative vocabulary of the 1980s and 1990s, while retaining a highly formal sense of geometry. Representative buildings of this more recent period include the W Barcelona Hotel on the Barcelona seafront and the Mohammed VI Polytechnic University in Ben Guerir, Morocco.

Bofill met Italian actress Serena Vergano in 1962. their son Ricardo Emilio was born in 1965. Bofill and French visual artist Annabelle d'Huart had another son, Pablo, born in 1980. Both sons eventually worked with their father at Ricardo Bofill Taller de Arquitectura, and are co-leading the firm as of January 2022. From the 1990s, Bofill lived in Barcelona together with Catalan designer Marta de Vilallonga.

La Muralla Roja is a fortress-like apartment building overlooking the Mediterranean sea. Its design nods to North African kasbahs. The apartments are arranged in a geometric plan, connected by courtyards, staircases and bridges. The predominant bright red finish of the building was chosen to contrast with the surrounding landscape, while some areas are painted blue to blend with the sky. 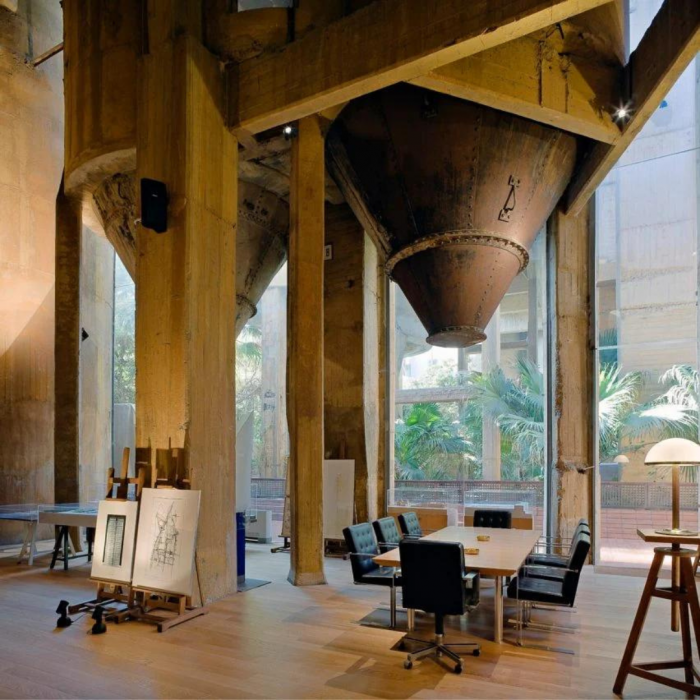 Built within a dilapidated cement factory on the same site as Walden 7 is La Fábrica, a complex containing the RBTA offices and Bofill's family home. Bofill's renovation celebrates the original concrete details of the factory but brightens it with green roofs, planted terraces and lush gardens. Its centrepiece is The Cathedral (above) – a large meeting and exhibition space held in the old factory hall that has 10-metre-tall ceilings. 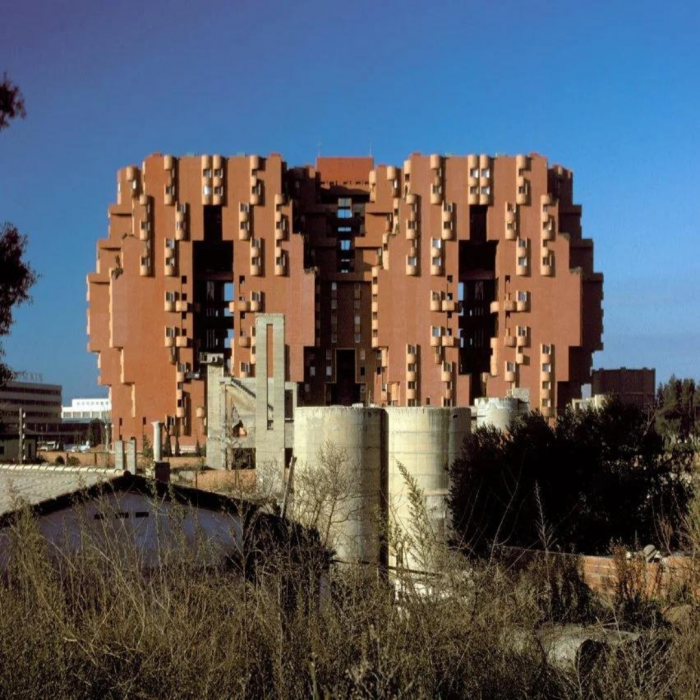 One of the best-known projects by RBTA is Walden 7, a giant terracotta-coloured apartment building in Sant Just Desvern on the outskirts of Barcelona. Set on the site of a former cement factory, the 14-storey building comprises 450 modular apartments that are linked by footbridges and arranged around courtyards. Their modular design is intended to serve the changing needs of its occupants. 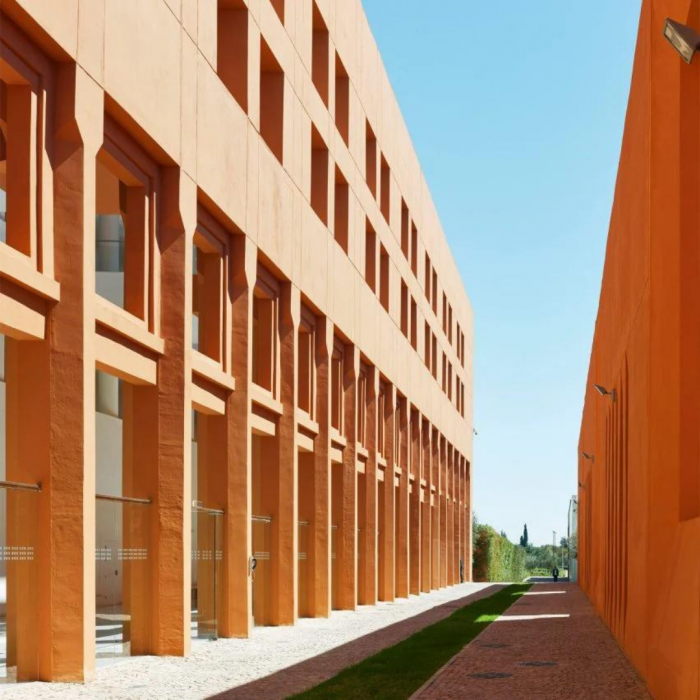 Terracotta-hued buildings arranged around semi-covered arcades define the Mohammed VI Polytechnic University, which RBTA won a competition to design in Ben Guerir in 2011. Extending over 55 hectares, the university combines teaching facilities with residential units. It takes its cues from Moroccan architecture in cities such as Fez and Marrakech and is geared towards pedestrians. 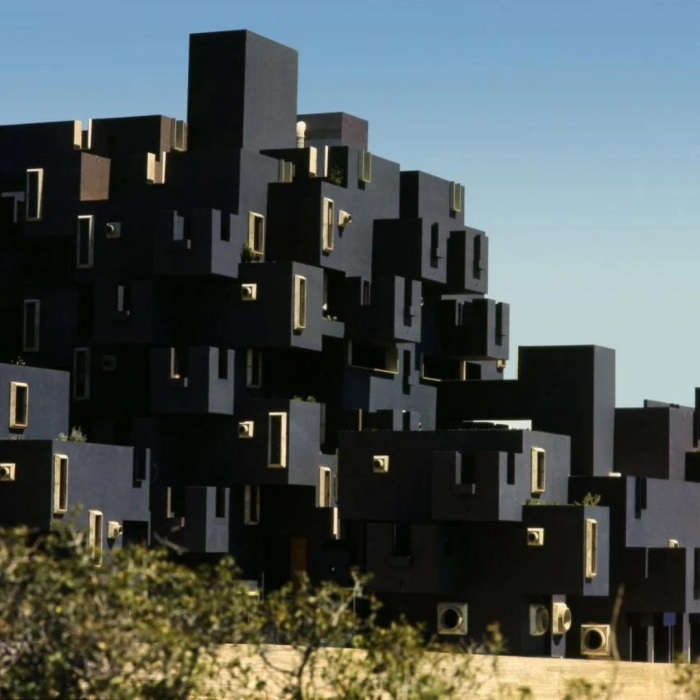 On a hill overlooking Sitges bay is Castell de Kafka, a dark blue apartment building that is built from clusters of cubic volumes that plug into central stair cores. The cubes contain the apartment living spaces and are lined with flexible partitions that allow occupants to adapt them. According to RBTA, the building is intended to embody the ideas of the experimental British architecture group Archigram. 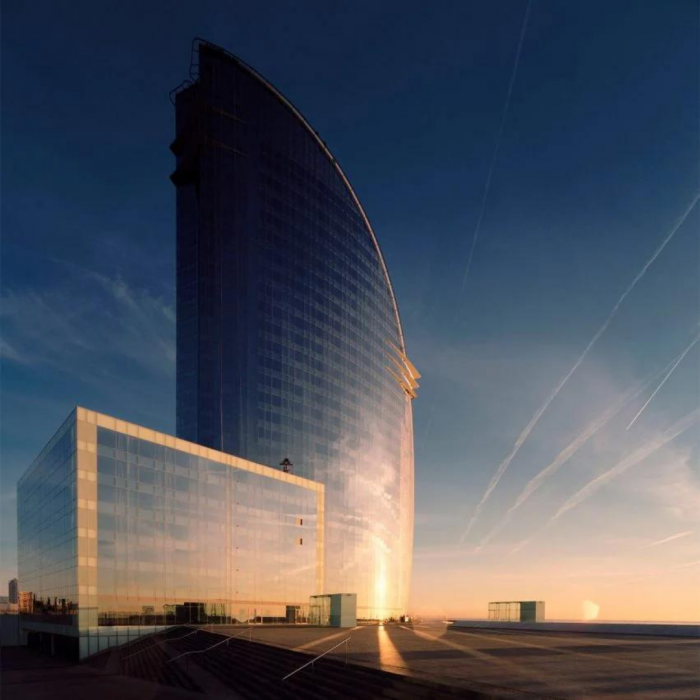 One of Bofill's most famed projects of the 21st century is the W Barcelona Hotel, which was designed as part of the renewal and expansion of the Port of Barcelona. Set on reclaimed land, the sail-shaped hotel is covered in glass skin intended to blend with the sky. Every guest room has views of the sea or city. 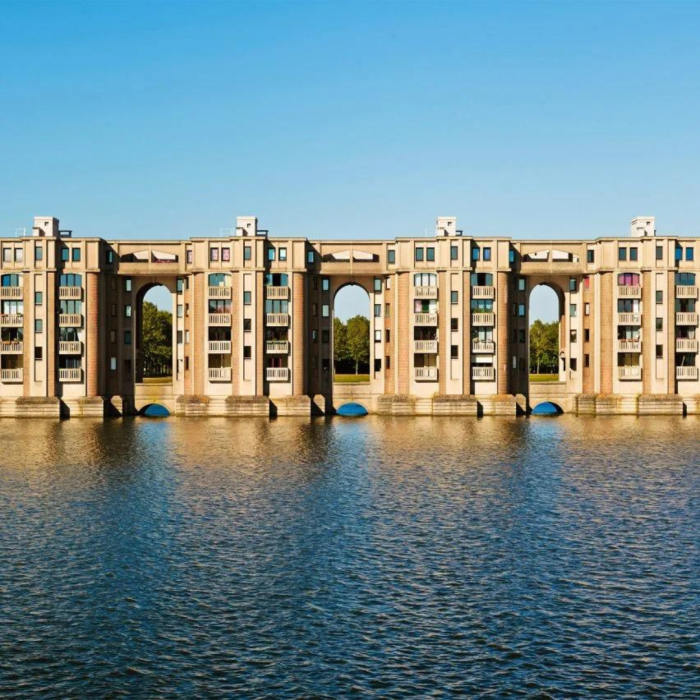 RBTA's first major project in France was the Les Arcades du Lac, an ensemble of gridded apartment blocks with ornate concrete facades, surrounded by gardens and an artificial lake. The studio's goal was to create a garden city, which favours pedestrians and hides parking underground. Its most celebrated feature is Le Viaduct (above), a building containing 74 apartments over the lake that nods to castles on bridges in the Loire Valley. 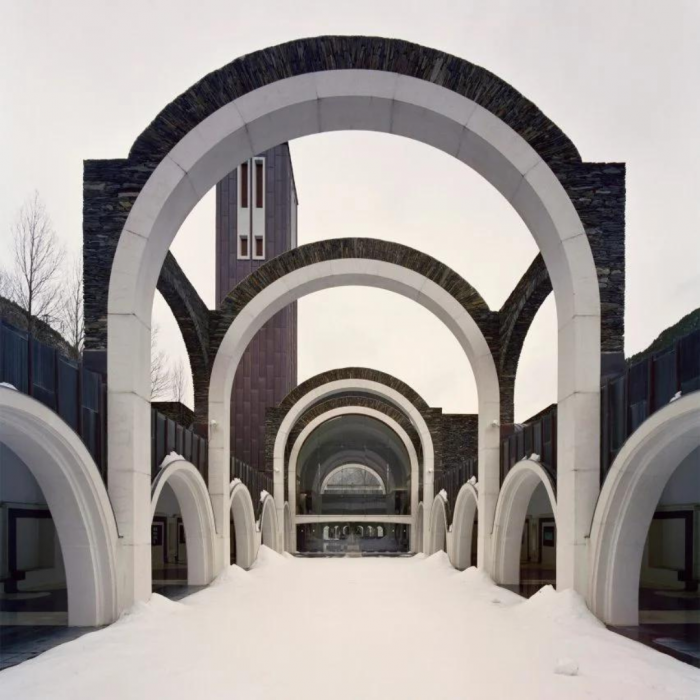 Following a fire that devastated the ancient Romanesque Sanctuary of Meritxell – a chapel on a mountainside in Andorra – Bofill's studio was tasked with restoring the site. The replacement features stone and slate walls that are animated by white arches. According to the studio, the redesign references Romanesque imagery to honour the original structure. 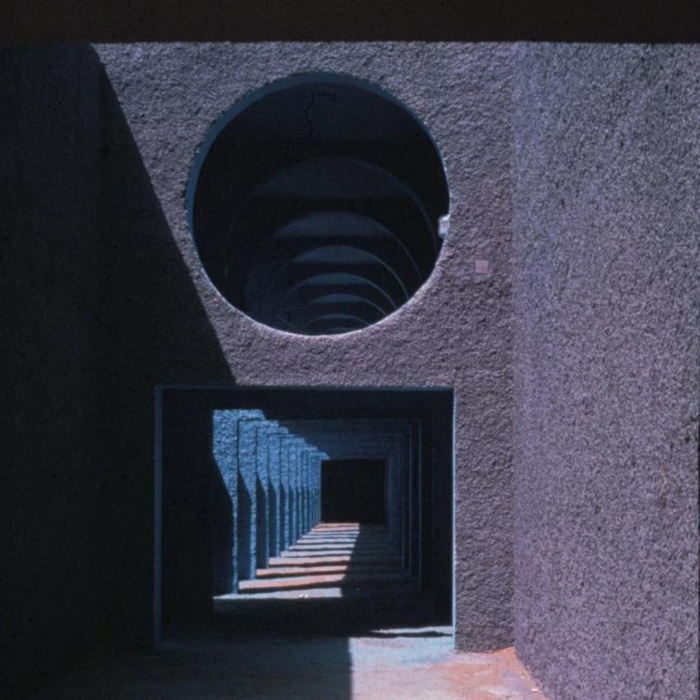 In 1980, RBTA completed a village for the government in Algeria. Located in the semi-desert area of Abadla, it was intended to encourage agriculture in the area. The development comprises family homes arranged around courtyards and a large central square that serves as a marketplace. It is completed with the studio's trademark geometric forms, which draw on both Arab and Mediterranean architecture.