An article by Ledia Lazi.  In Japan, there are many concepts of importance and meaning that are part of their culture. The traditions and trends of the country are really interesting and revolve around different philosophical forms. Japanese culture and philosophy have a unique ideology of beauty and its perception and aesthetics. One of the intriguing concepts is wabi-sabi.

The definition of wabi-sabi

Wabi-sabi is a view or thought of evidencing beauty in every aspect of imperfection in nature. It has to do with the existing aesthetics of things, which are imperfect, temporary and incomplete. It is basically a concept or ideology that comes from Buddhism and the teachings about the three points of existence called "incontinence" (mujo), suffering (ku) and emptiness or lack of self-nature (ku), the lack of individual nature that things carry, their immutable identity. Also, this notion evidences that the objects or the beings exist independently, separately.

Wabi-sabi is a form to beautifully describe what is natural and pure and a form to acknowledge the beauty of any substance or being in its most natural and raw (organic) form. It eliminates the rather Westernized concepts of artificial beauty and idealization of perfection, which obviously remains unachievable and unnatural.

The western world has turned the concept of beauty into something that is becoming more and more refined, as well as unattainable day by day, and distracts you from the idea of ​​natural beauty and the acceptance of flaws, which, on the contrary, the wabi-sabi belief and concept for the Japanese embraces and allows people to be more accepting and open to embracing the beauty of flaws and rawness. 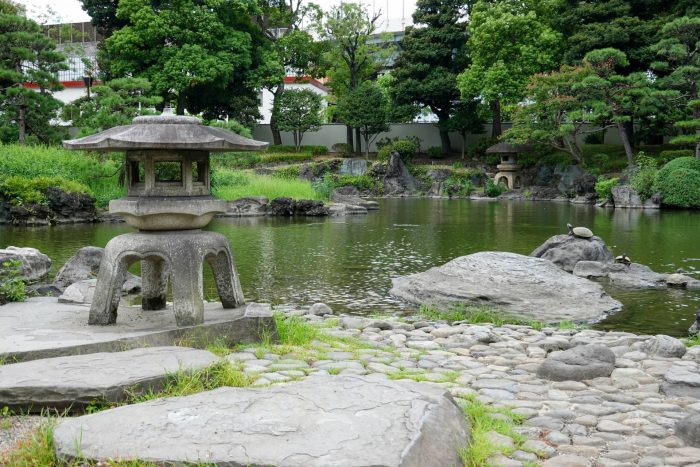 Wabi-sabi in Japanese culture and art

Wabi-sabi has an effect and influence rooted in Japanese culture. The philosophy reflects on many local aspects like Japanese gardens, architecture and many other art forms as well. It is almost a special experience to be experienced and it is a fantastic theory, turned into practice through art and decor.

Wabi-sabi is a philosophy taken from the simplest ideas and common thoughts, but it is implemented in such a beautiful way. It fits in well with the Japanese environment and lifestyle. This philosophy reflects their temperament and lifestyle, which is also related to Zen Buddhism.

The meaning after the words wabi-sabi

The concept is better understood if we divide it into the roots of the word itself. This leads to a really interesting explanation and makes sense behind the whole concept that the word introduces. Wabi - expresses simplicity, temporality, flaws and imperfection. In contrast, Sabi - expresses the effect that time has on a substance or any object. And together wabi-sabi embrace the idea of ​​the value of the aesthetics of aging, of flaws and the beauty of the time effect of imperfection. The two parts of the word when combined, complement each other. They express the simplicity and truthfulness of the shape of an object.

To close, it embraces finding comfort in purity and a life detached from the materialistic fixation of the world. In architecture, this is about a comfortable design, guided by simplicity and naturalness. It evidences the application of undefined or refined textures, in their natural and organic form, and far from claiming a pure crystalline space materialized with the ideal of "perfect". 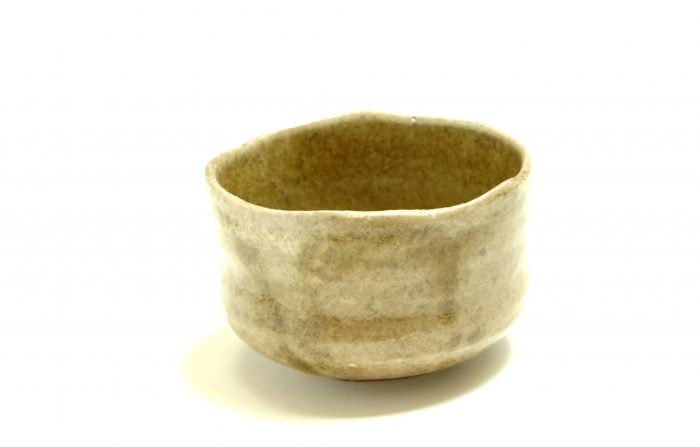 Understanding the difficulty behind the concept

For many foreigners, the concept of wabi-sabi becomes difficult to understand over time. However, when simplified and decomposed, it becomes clearer and easier to adapt. The purpose behind the very meaning of this concept is directly related to the daily life and art of the Japanese. This philosophy is presented in their culture, traditions and trends. It is very different from what the rest of the world sees. For foreigners it may be difficult at first, but when embracing this concept, wabi-sabi opens a door to a captivating belief. It therefore has the ability to change the common mindset and perception of what beauty and aesthetics are, and what they may actually be.

We know Kintsugi, the Japanese technique of arranging broken objects of gold pottery, as a way to turn something imperfect into something of value, a practice that is part of the wabi-sabi philosophy, which sees things as unfulfilled and imperfect, as things which possess beauty in their individual way. Wabi-sabi also appreciates disorder, asymmetry and temporality, love for natural materials and shapes: stone, tree branches, a handmade vase, all of which have in common the roughness, simplicity and uniqueness that makes them beautiful, despite their irregular shape and texture.

Sergey Makhno combines Japanese aesthetics with his country traditions in this apartment he designed for his family. A two-storey apartment, that presents a careful design, which is in contrast to a city with concrete constructions: all the walls are clad in clay in an old technique used in Ukrainian houses, while the wooden beams that support the ceiling and doors, are an element of rustic (rural) references.

Despite the look and feel of a country house, the apartment is completed with contemporary comfort, thus guaranteeing a comfortable life for family members. As is the case of architects when building their homes, the wabi-sabi apartment has some experimental touches, and is characterized by the design of the lighting and furniture by Makhno himself. The meaning of the experiment in this project was to add a conceptual approach to the whole overall design, based on the theory of four elements: the soil presented by the clay walls; fire and water are symbolized by many works of art; meanwhile the space between the objects and the rooms belongs to the air. Bonsai trees and a small roof garden add to the apartment its oriental character, while traditional wicker rugs emphasize Ukrainian culture and work. More like sculptures than functional objects, Makhno metal lighting hang in the dining room and in one of the rooms, as a form of incorporating a contemporary element within this space with natural earth textures and tones.

Their imperfection also demonstrates how the wabi-sabi philosophy finds application in contemporary design, thus making us appreciate the beauty of handicrafts through the use of natural materials. 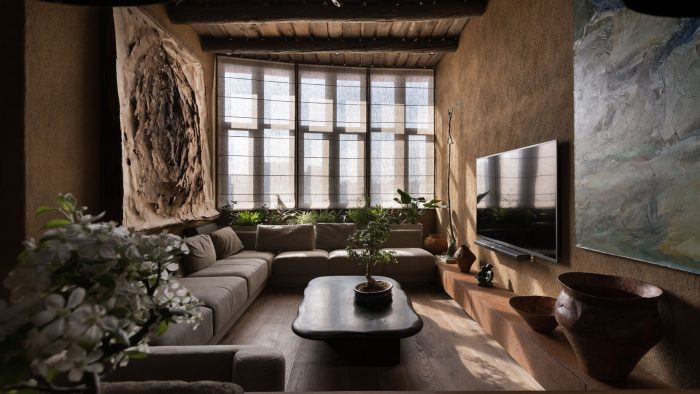 Completed in 2014 by Tadao Ando, ​​Casa Wabi is an Art and Residence center organized along a 312-meter-long concrete wall, in a picturesque oceanfront location in Mexico. The house has the name of the wabi-sabi philosophy itself: the beauty of the imperfection of life.

"The project is located opposite the Southern Pacific Ocean at 550 meters of coastline with a stunning view. In such a generous length of the country, it has created a single line of concrete wall of 312m length and 3.6m height. The wall creates a horizontal division between public programs on the north side and private programs on the south side. The wall is the main line that marks a path that separates each program, thus serving as a wall in the exterior and interior. Sunsets in bright red and orange reflect on the concrete surface.

"Tadao Ando Casa Wabi is a philanthropic organization created by mexican artist Bosco Sodi. Sodi has always appreciated the design of Ando’s buildings and asked him to design this foundation. Casa Wabi has waiting rooms for 6 people at the same time, taking into account this fact, services include 6 villas that offer a cozy stay, a bookstore, two separate studios, a gallery, a design room, a garden and other spaces of recreation.

The concrete wall extends from east to west in the form of a compass, following the terrain and creating in this form a series of zonings. On the south-north axis is placed an elongated pool towards the ocean shore. Casa Wabi offers a space for artisans, offering a variety of projects. This stay can vary for 15 days - 3 months. A diary is created for each member which is archived as a foundation document. To stand out from the placement and linearity of the walls, the roof is made of layers of dried leaves from palm trees, normally used to create shading and ventilation. Structures such as this roof are referred to by the locals as PALAPA. 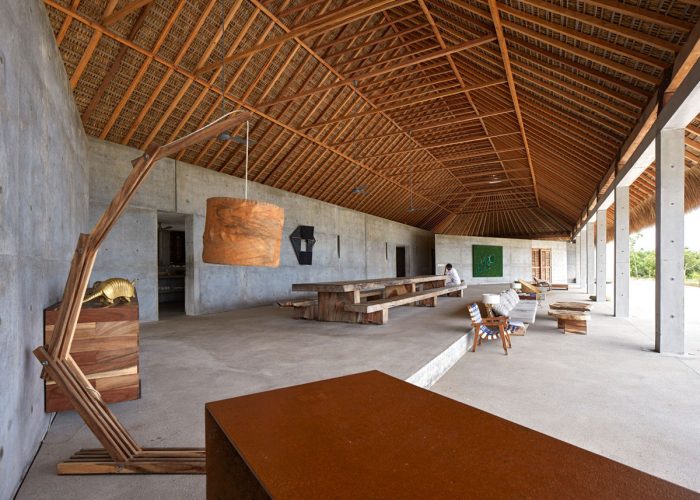